Víðarr is known as the silence city, the only place in the world there all kinds of life is muted down to a degree of silence which is rather a fierce touch, than just a certain part of acoustic. Far more than the simple lack of noises, Víðarr is entirely constructed and built out of a deeply rooted and complete silence which exists since centuries. The only way to enter is through the seaway, following a widely branched system of canals and slighting in nearly motionless tiny boats. But since more than hundred years no stranger would have ever put a feet in the city of silence. Massive gates are blocking every possible passage and a hug iron wall surrounds the city.

It is said, that at first there is the silence in the streets, in the shops and squares, a silence carried by the people living here. Perfectly trained to avoid every single noise, their shoes are made out the thickest silk, their movements slightly faster than slow motion and their conversations happen through gesture, reading a complex system of different long and short breezes produced by movements. The second silence is the stillness of the buildings, the softly curved bridges, the small sized houses and the streets covered with layers of carpet. It seems even the stones became unnaturally quiet and adopted the habits of their inhabitants during centuries of missing noises, like a perfect symbiosis. The third and last silence is the silence of the waiting, which is the deepest and most perfect crafted silence. It is the waiting which holds together the other two, desperately and longing.

But for what these people are waiting for? Countless stories and rumors are floating the market places and taverns all over the world. The silent city is probably the wildest discussed place and the best hidden secret under the sky. But none of these stories mention the most important sound ever happens in Víðarr: the cracking noise. The most delicate cracking you can imagine, maybe like an eggshell which opens at the very first moment, like a cold stone which get warm with the first sunrise of the day, or maybe like the perfect snowflake which falls for the first time in a dancing fire. This cracking is the only reason for the existence of Víðarr. It means every word and letter, every number, every color and every single breath. This cracking is the greatest present ever presented.

If you hear it after endless times and a numbing quietness, you would see the streets packed with hard breathing bodies, naked feet rushing over carpets and shoulders scratching along house walls. A brutal and cruel race takes place and the air is ranged with fresh blood and breaking bones. If you hear the cracking you understand the silence, you understand Víðarr.

Suddenly a shirt hangs somewhere at the marketplace, in a lane, on a house wall or tower, one single shirt somewhere placed in the area of a whole city. It appearance is signaled by the cracking and it importance known by every human being in this town. This shirt holds a brand new soul inside the fabric, directly coming from heaven. Filled with golden sticky syrup, with glitter and wooden sticks, its fabric is heavy like a tree and fragile as a breath. The first person finding the shirt pulls it in pure panic and joy over the head and suddenly remains still. Now the liquid begins to steam and runs all over the body, all over the skin and slipping through every opening and pore. It penetrates muscles, bones, nerves and agglutinates eventually the firmly beating heart. The following is predetermined and known since the beginning of time. The lucky person lies down with his partner, they merge silently into each other and with the conception the heart stops to beat. Nine months later a new born child with a new born soul steps with the quietest scream in the city of Víðarr and starts to wait for the cracking noise, for the only reason to be alive, for the only reason to inhabit this city. 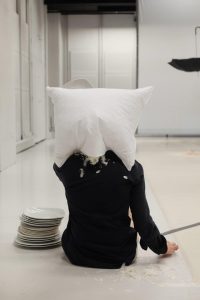 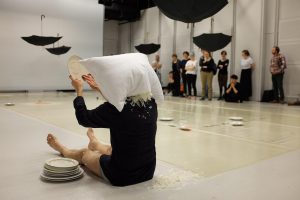 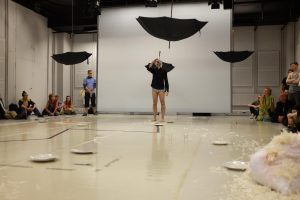 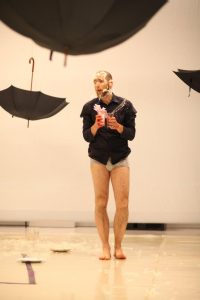 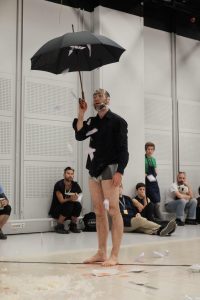